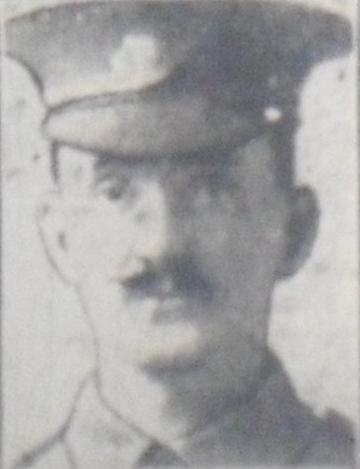 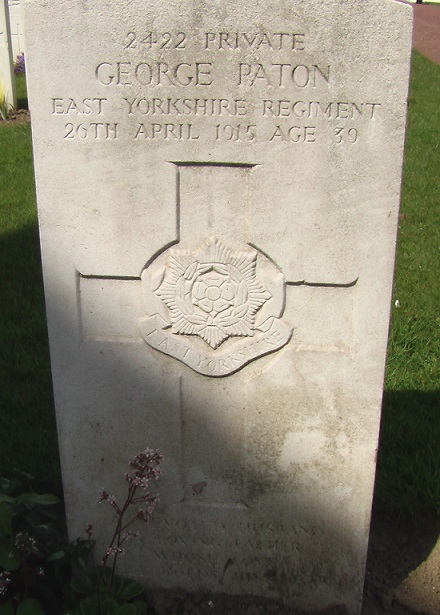 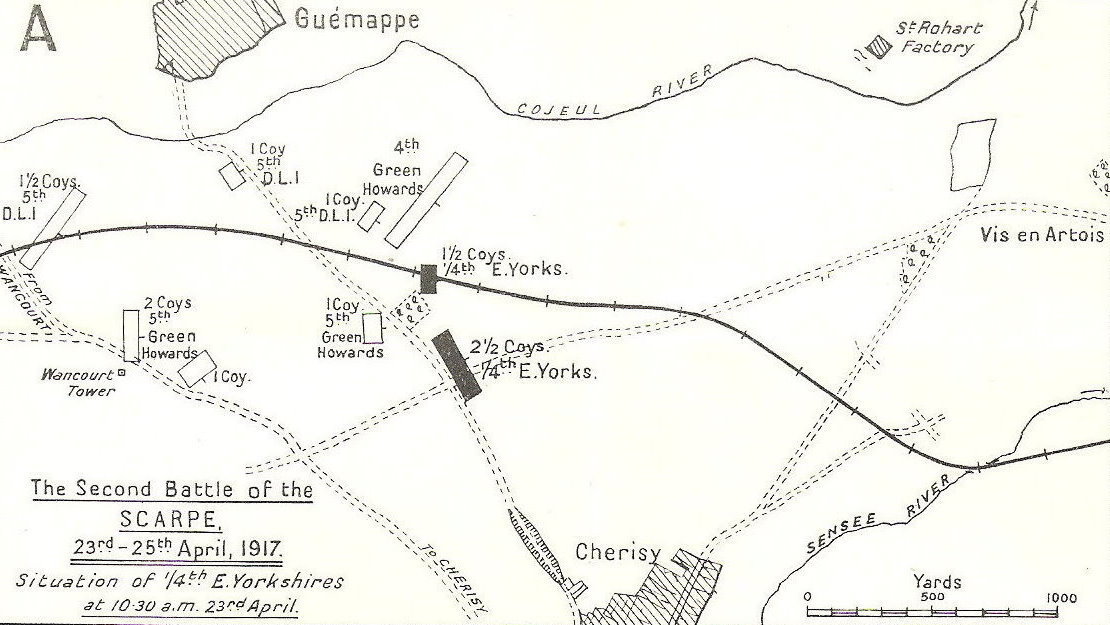 Attested 31 August 1914 4th Battalion East Yorkshire Regiment at Londesborough Street Barracks Hull – Photo Hull Weekly News 12 December 1914 – Medal Index Card Entered Boulogne France 17 April 1915 with 1/4th Battalion East Yorkshire Regiment – Died of Wounds 8th Division Casualty Clearing Station – Effects to Garantee and Adminitrix Mrs Alice Gertrude Paton – Photo and write up Hull Daily News 10 May 1915 – Commemorated East Yorkshire Regiment War Memorial Beverley Minster East Yorkshire
WAR DIARY
24 April 1915 at Vlamertinghe
1.30am Turned out & marched to hold east bank of Ypres canal. Map Belgium sheet 28.C 25.a. In position 3.15 pm being attached to 13th Brigade. Four men wounded by shell fire. 10.00 am Orders received to march to Wieltje. Arrived there 1.00pm and dug ourselves in at a point a few hundred yards NE of the Headquarters 27th Division at Potijze Chateau. 3.00pm Received orders to support an attack being made by the Canadians on Fortuin. Moved out about 3.45pm in support to the 4th Yorkshire Regiment towards Fortuin and soon came under heavy artillery fire from our left flank from the direction of St Julien. Artillery formations were adopted, the Battalion moving in lines of platoons-two platoon’s D coy leading. The attack on reaching a point C 24a (map Ypres 28) swung to the north towards St Julien and then came under somewhat heavy rifle & machine gun fire. Rifle fire was opened at 950 yards & eventually at 500 yards. These two battalions joining up with the 18th Royal Irish Regiment who had apparently been sent on a similar mission. No fire from the direction of Fortuin had during this time been heard and no Canadians seen. 7.30 pm The OC Royal Irish having received orders from his General that we were to retire when it became dark, we did so. The retirement was carried out in good order by platoons and our Potijze trenches were reached about 11.00pm.
CasualtiesLt Col Shaw, Major Theilmann and Captain B Farrell and 12 other ranks
killed.
25th April
1100am moved to a line of trenches (in 2nd Line) South of Potizgi and running parallel to the Potizigi – Zillebeke Road and just on the East side of it. Our left was at a point I.10.G (SE Corner) Map 28 and our right about 500 yards south of the Railway level crossing. The 4th Yorkshire Regiment had taken up a line in continuation – north of the level crossing. Our battalion was continually shelled throughout the day and we suffered the following casualties: – Capt Morrill and Lt Grindell wounded. Four other ranks killed and 6 other ranks wounded. Both Major Easton and Capt Easton slightly wounded and remained on duty. 0900pm Received orders to occupy a line of trenches close to east of Potizigi Chateau. On reaching this place we received further orders to march at once back to ‘A’ Camp west of Ypres.
26th April
0200am Arrived ‘A’ camp.