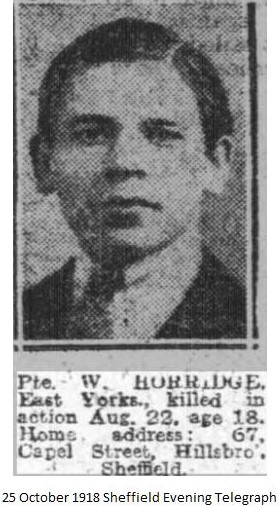 About mid-night on the 21st August, the Battalion advanced at right angles to the line held by the 1st Battalion Lincolnshire Regiment, crossed the Miranmont-Beaucourt Road which ran by the river side, and moved to the river bank, where we formed our front line. On the right were the 15th Durham Light Infantry, who moved in conformity, and they joined up with the Leicester Brigade about the position of Beaumont-Hamel station. The Kings Own Yorkshire Light Infantry were in support in their positions about Beaucourt. The advance was a silent one. C and D Coys held the line of the river, whereas A and B protected the flank and rear respectively, and joined up with the 1st Battalion Lincolnshire Regiment about Baillescourt Farm. Battalion HQ remained on the Puisieux Road. The presence of our Coys was soon recognised by the enemy, and the road was shelled, and the valley in which was Battalion HQ was shelled too. Some of the shells were of 8in. calibre. The Germans across the river fired sharply with machine guns and rifles. Captain G. Lambert was wounded, and Lieutenant I. Hutchinson was killed. The Battalion remained in this position all day, and apart from exchanging rifle shots all was quiet. The sun came out after morning mist over the river had cleared, and the heat became intense. The position was objectionable with the foulness of the marshes. Wounded could not be moved without heavy casualties to bearers. Captain Watson was killed. During the early morning small patrols crossed through the marshes and made progress almost to the Grandcourt Road on the fronts of both Battalions. From this it was obvious that the Germans had merely delaying posts at wide intervals across the river. These patrols suffered heavy casualties, and could not establish positions across the river. During the day the Brigade Major and the writer were busy reconnoitring the various fronts for establishing foot bridges to cross the river. Regimental Sergeant Major E. Merewether was wounded slightly, and was succeeded by Company Sergeant Major T. Carney, of A Coy, who carried out both duties temporarily.
In the evening the Royal Engineers Field Coy came down to the river to fix foot bridges across the river in three places already selected, about 300 yards apart, and opposite Beaucourt. All was quiet, and the foot bridges were carefully covered with marshy debris to prevent the enemy from recognising them next day. They were sited where marshes and trees nearly stretched across the river.
Just before midnight the Germans made a determined counter-attack against the 1st Battalion Lincolnshire Regiment, and temporarily drove them back into the valley behind their position. This placed A and C Coys in an embarrassing position. Captains Case and Oughtred withdrew their Coys in conformity with the line of the Lincolnshire Regiment. The situation was unpleasant, and Case went to Battalion HQ to consult with Lieutenant Colonel du Moulin, but the position quietened, and shortly afterwards the Lincoln Brigade (62nd) took over the responsibility for this front, and the 1st Battalion East Yorkshire Regiment were withdrawn to the position they captured on the 21st August, north of Beaucourt. Here the Battalion rested the rest of the day (23rd August).