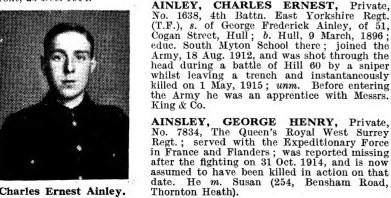 Attested 18 August1913 with the 4th Battalion at Londesborough Street Barracks – Medal Index Card Entered Boulogne France 17 April 1915 with 1/4th Battalion East Yorkshire Regiment – Effects to Mother and sole legatee Minnie F – Obit and Photo De Ruvignys – Commemorated East Yorkshire Regiment War Memorial Beverley Minster East Yorkshire
War Diary
30th April 1915
2am It was now too late to return to our original trenches, and the Battalion moved into support trenches (at D.20.a Map 28) running from Hill 37 to 40 yards on the east side of the Zonnerbeke – St Julien Road. We were at once taken in enfilade (as the London Rifle Brigade had already been) by the enemy’s guns and also fired on from the South East and taken in the rear.
Major Easton and Captain Digleby were both wounded, and during the whole day we shelled and suffered 4 more casualties – wounded.
At 9.30pm the Coys joined the Rifle Brigade and Hampshire Regiment as previously ordered. A and B being with the Rifle Brigade, who ordered B to remain in Support in the present trenches. This Coy was moved from the left of the line to the trenches on the right of the Rifle Brigade trenches. Movements complete by 11.30pm.